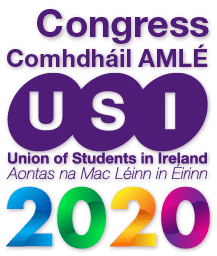 USI Congress performs the essential democratic tasks of the Union of Students in Ireland.  It is the supreme governing body of USI and makes the main decisions for the national movement.  This year, due to the Coronavirus contingency, USI Congress will take place online.

The major functions of USI Congress are:

Any member of USI (which means any student studying in a college whose Students’ Union is a member of USI) can stand for (almost) any election in USI.

The positions change from time to time, but in general these are:

For the purposes of all USI’s work, Sabbatical Officers in each member organisation are also considered students.

To seek election you must secure the nomination of two Member Organisations (submitted on their headed paper and signed by the President of their Students’ Union), which must be from inside your region if you’re standing for regional VP.  This process closed in February 2020.

The President and each Vice President will give an officer report in written format on the site, then formally commend it to Congress.  This report will be available on this site.

Opportunities to question each VP will be given.

This whole site is designed to concentrate on Policy Setting, but here it is in brief:

Member Organisations propose policy in ‘Motions’, which set out a decision to be made and actions to be taken by Congress and the Executive Team in future.