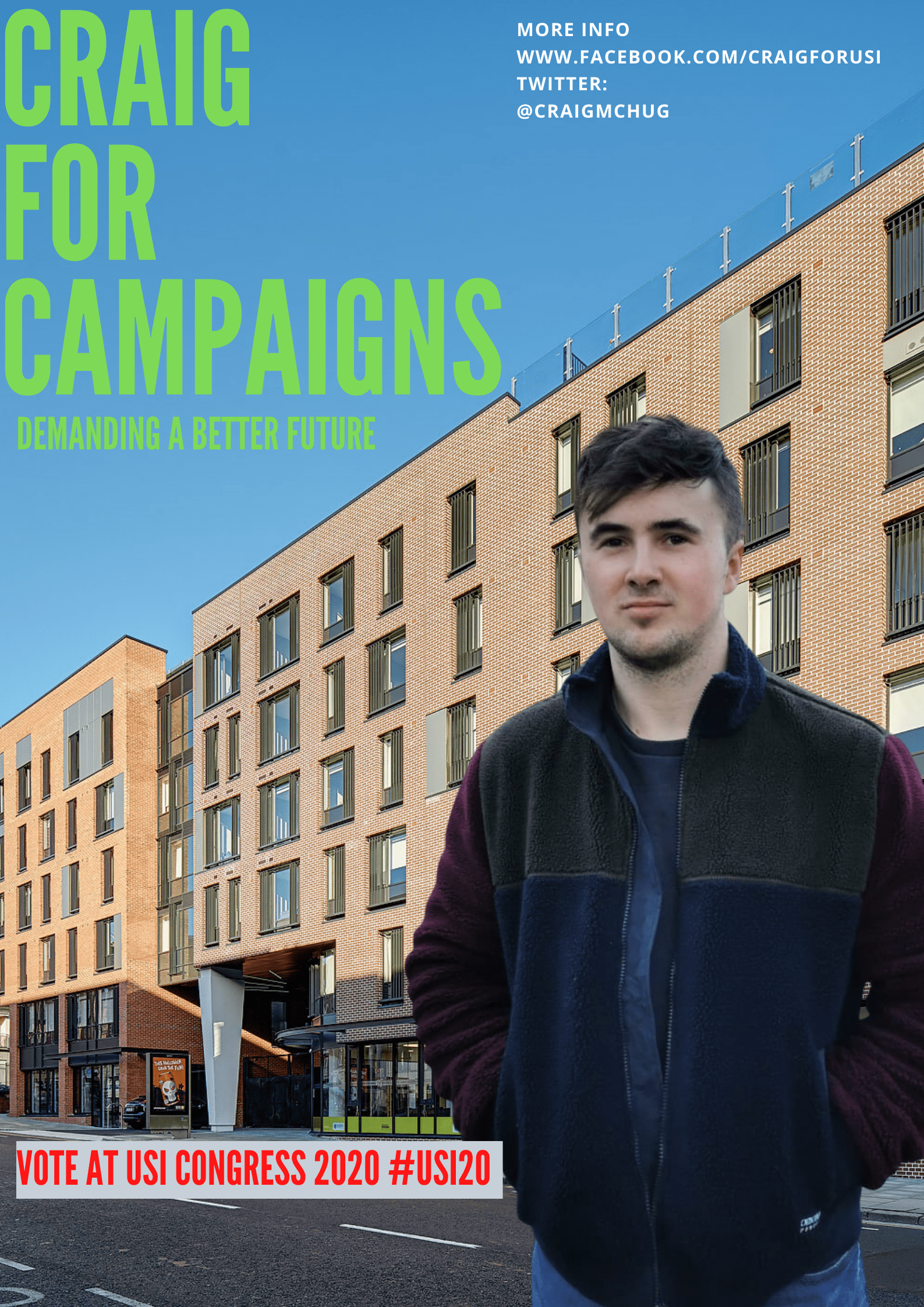 My name is Craig McHugh, I’m 23 years old and I am the current VP for Dublin Region in USI. This congress, I am asking for your support to elect me the new USI Vice President for Campaigns.

Student activism isn’t a hobby for me; it’s what has driven me for over 6 years now since I began work with ISSU in 2014. It has shaped my view of the world, politically , economically and socially. I am someone who understands the systems in which we live under and who yields power in such systems. I know that as a movement we must challenge these systems now more than ever.

Right now, we are in a battle. A battle between private interests and the common good. It’s a battle between right and wrong. Between a rent freeze with reductions and a further hike in rents. It’s a battle that only we, the student movement can truly be trusted to fight on the right side of. It is up to us, right now on this occasion, in this year, to stop asking for better and start demanding it.

It’s time we changed tact. Letters of outrage are no longer the totality of a campaign rather the warning sign to our targets that things are about to kick off. I believe in direct actions, I believe in sleep outs, I believe in blockades, I believe in rent strikes. I believe in edging things up a notch. In 2020-21 , if the campaigns strategy committee wants a large scale demonstration in October – we’ll have one; but I tell you this– gone are the days where that’s the only day of the year the government hears us banging outside their offices.

In saying this, I am pragmatic. I know what works and I know what needs to be tried. In my time as VP Dublin and as both a sabbat and PTO in DCUSU I’ve seen what works and what doesn’t. What gets students out on the streets. What wins politicians over.

My specific plans include – an increased focus on direct action, a longer term national demo plan to equip SUs with the plans to maximise their turnout, a campaign called JoinAUnionary to encourage union membership, an entire campaign dedicated to ending the commodification of education, a concerted effort on tackling precarious work and low pay and ultimately – campaigns that are impact-focused.

This is not a one person role; this is about a movement and the direction it takes. Either we allow ourselves and those who follow us to become merely annoyed and vexed cash cows or we stand up and demand a future.

Demand an end to the contribution charge, to shockingly poor student supports, to marketisation, to long waits for essential supports. Demand education as a public good. Elect me to lead on how we push these demands.